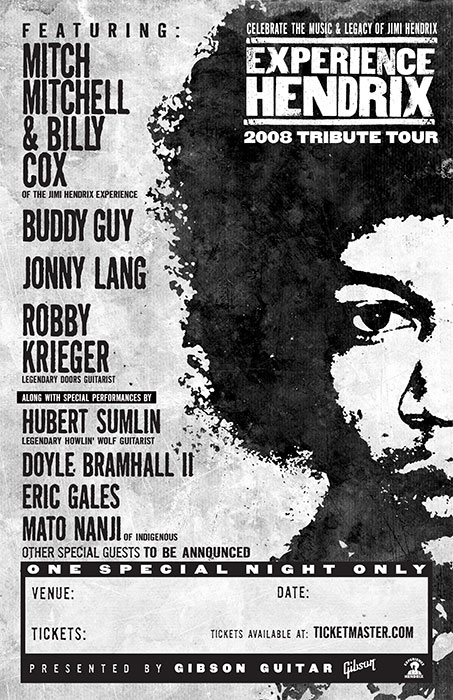 
A five week long, cross-country tour featuring some of the best known and most respected figures in rock and blues has been set to celebrate the legacy and music of Jimi Hendrix. Presented by Experience Hendrix, L.L.C., the Hendrix family-owned company founded by James A. "Al" Hendrix, Jimi's father, entrusted with preserving and protecting the legacy of Jimi Hendrix together with musical instrument giant Gibson Guitar, this year's Experience Hendrix Tour represents a dramatic expansion beyond last year's seven sold out performances.

Hubert Sumlin, the Mississippi-born guitarist who worked with both Howlin' Wolf and Muddy Waters as well as the Memphis-based Eric Gales, Mato Nanji of Native American roots band Indigenous are also part of the tour as is Chris Layton, the legendary Double Trouble drummer who rose to fame backing Stevie Ray Vaughan.

Most remarkably, Mitch Mitchell (drums) and Billy Cox (bass), the same Jimi Hendrix Experience rhythm section that played behind Hendrix at such landmark rock festivals as Woodstock and the Isle of Wight will return again to celebrate the guitarist's enduring legacy.

Experience Hendrix has promised that special guests will also appear throughout the tour. The first artist to be announced is Doors guitarist Robby Krieger who will appear on five of the dates along with other surprise guitarists expected to join during the course of the tour.

Various combinations of these artists will perform such Hendrix signature songs as "Purple Haze," "Hey Joe," "Voodoo Child (Slight Return)" and "Red House" and are sure to make the concerts very special events for both new and veteran Hendrix fans.

This year's Experience Hendrix tour is an exciting prospect for Billy Cox whose history with Jimi Hendrix dates back to their days in the Army together. He commented, "It's a thrill for me to play Jimi's music for audiences now as it was in the early 1960s. The Experience Hendrix tours have shown how timeless this music really is."

Addtionally guest of this year's tour will see the exclusive Gibson tour buses, experience Gibson instruments and take part in special events along the stops presented by Gibson Guitar. Interested fans of Jimi Hendrix can follow weekly updates of the tour on www.gibson.com

Gibson Custom meticulously produced the Jimi Hendrix Inspired by Psychedelic Flying V which was an exact replica of the famous 1967 Flying V Hendrix used on tour in 1967 and 1968 with his own handpainted designs which originally appeared to be nail polish. The Jimi Hendrix Gibson Custom Psychedelic Flying V instantly became a sold out phenomenon and a tribute the genius which we know as "Hendrix."

Janie Hendrix, CEO of Experience Hendrix noted, "Everyday, we see how Jimi's musical legacy continues to transcend generational and cultural boundaries. This tour is our way to give live audiences a concert experience that reflects the genius of his unifying spirit. Part of our mission is to share Jimi's music with audiences of all ages and these tours continue to play a key role in fulfilling that vision."

"The influence Jimi Hendrix has had on rock music is immeasurable. His iconic status in the world of music is as strong today as it was in the late 1960s. Gibson Guitar is honored to present the celebration of his legacy and the music behind his distinctive guitar techniques through the Experience Hendrix Tour. Along the way, guests of the tour will be treated to surprise guests, Gibson exclusive announcements and special promotions," said Henry Juszkiewicz, Chairman and CEO of Gibson Guitar. "The tour will give fans the priceless opportunity to enjoy music from one of the best guitarists of all time."

Marshall Amplification will also be supporting Experience Hendrix Tour this year with a healthy supply of their top notch amplifiers including the Super100-JH stack that was unveiled at the 2006 NAMM show in Anaheim, CA. This limited edition hand wired Super100-JH stack was limited to only 600 pieces worldwide and debuted as part of the company's celebration of its close association with Jimi Hendrix. The all-valve heads and accompanying 4x12 cabinets have been crafted to recreate the exact sound and look associated with Jimi Hendrix in 1966/67.

The first Experience Hendrix Tour featured Guy, Shepherd, Sumlin, Paul Rodgers, Santana as well as Mitchell, Cox and others and launched in 2004 and playing three sold-out performances in Seattle, Portland and San Francisco. The success of these performances led to a seven city 2007 tour that concluded with two sold out performances at New York's Beacon Theater. John McDermott, who manages the Jimi Hendrix music catalog on behalf of Experience Hendrix L.L.C. also serves as the producer of the Experience Hendrix tours, remarked, "With each successive tour, we've been able to showcase some of the most accomplished musicians in the world. The concerts bring together Buddy Guy and Hubert Sumlin, two legendary blues artists that Jimi admired together with the finest young guitarists performing today. We're proud to bring Jimi's music back to the concert stage in such an exciting context."

Sorry, no images from this tour are currently available.
Please check back soon as we are adding new photos all the time.