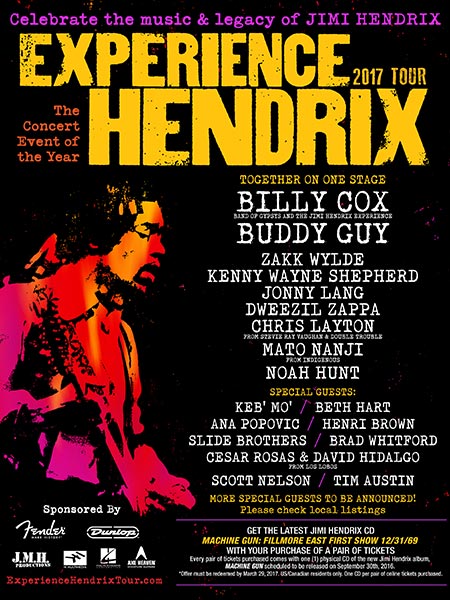 2017 EXPERIENCE HENDRIX TOUR, FEATURING BUDDY GUY, ZAKK WYLE, KENNY WAYNE SHEPHERD AND MORE, WILL BE MOST EXTENSIVE ONE TO DATE


Lauded by critics and fans alike, the multi-artist Experience Hendrix Tour is set to return in 2017 to celebrate the music of Jimi Hendrix, long hailed as the genre's greatest innovator. This latest edition of the annual tour will be the most ambitious one to date, encompassing 29 performance dates in February and March, including a special engagement in Seattle, Hendrix's hometown, at the city's historic Paramount Theater.

Now in its second decade, the tour celebrates the musical genius of Jimi Hendrix by bringing together a diverse array of phenomenal musicians, ranging from blues legend Buddy Guy to Black Label Society and former Ozzy Osbourne guitarist Zakk Wylde, as well as Jonny Lang, Kenny Wayne Shepherd, Dweezil Zappa, Keb' Mo', Doyle Bramhall II, Ana Popovic, The Slide Brothers, Mato Nanji from Indigenous, and Beth Hart will also be featured among many others. Billy Cox, bassist for both the Jimi Hendrix Experience and Band of Gypsys, anchors a rhythm section that provides the foundation for exciting renditions of numerous signature Hendrix favorites such as "Purple Haze" and "Little Wing." The new tour comes on the heels of the 2016 Experience Hendrix Tour, which sold out nearly every one of the 27 venues that hosted it.

Jimi Hendrix was a pioneer in both rock and blues, and expanded the possibilities of what could be achieved on his instrument and in popular music. Likewise, the Experience Hendrix Tour continues to expand as Jimi's legacy grows. In 2004, the first tour came to fruition with a three-date string of shows on the west coast, starting in Hendrix's hometown of Seattle. By 2008, the Experience Hendrix Tour had become a full-fledged, coast-to-coast expedition and continuing to date and without showing any signs of slowing down. Audiences are presented the opportunity to see great artists paying homage to Hendrix while collaborating with each other in ways they'd never do in their own live shows.

Multiple Grammy Award winner and Kennedy Center Honoree Buddy Guy, whose involvement in music pre-dates even that of Hendrix, shed light on his personal friend, "He was so creative, especially everything he did with the special effects. He took it all to this other place, and he could really play. He was one of a kind. Hendrix brings us together, everybody on this tour."

Experience Hendrix Tour veteran Zakk Wylde, who named his own son "Hendrix," spoke about being on the road with the other musicians. "When you listen to all the fellas and the gals that are out there on the tour, it isn't just the great solos. They are great songs, you know. It's not just about shredding. I'm totally honored to be part of it."

Kenny Wayne Shepherd, who has closed every show he's ever played since the age of 15 with the Jimi Hendrix Experience's "Voodoo Child (Slight Return)," commented, "The music of Jimi Hendrix has always been a large influence on my life and music — in no small part due to his blues roots. He showed a lot of his influences and the foundation from which he built his music." He went on to say, "Jimi Hendrix was one of the greatest performers, entertainers and songwriters of all time, but as far as the guitar goes, he made a statement with his instrument that has yet to be matched."

2017 marks the 50th anniversary of the Jimi Hendrix Experience's debut album Are You Experienced (released on May 12, 1967) as well as the follow up album Axis: Bold as Love (released in the UK on December 1, 1967). 1967 was also the year Jimi Hendrix rose to intercontinental prominence, when he made his U.S. debut at the Monterey International Pop Music Festival, lighting his guitar on fire to a mesmerized audience. The repertoire from this stage of Jimi's career serves as a cornerstone in Experience Hendrix Tour sets, as songs like "Fire," "Manic Depression," and "Are You Experienced?" are played by various musicians on a nightly basis.

During his lifetime, Jimi Hendrix always used the live performance context as a platform for exploration. The fact is evidenced by the release this week of the new live album Machine Gun: The First Fillmore East Show 12/31/1969. The album is a thorough document of Hendrix's Band of Gypsys' first concert ever, in its entirety. This trio of Jimi, Buddy Miles and Billy Cox was short lived, but left an indelible mark on music by combining funk, rock and soul at a time when all three genres were in their formative stages. It's expected that some of the songs featured on the Machine Gun album, including "Hear My Train A Comin'," and "Power of Soul," will be heard on the Experience Hendrix Tour, Experience Hendrix, L.L.C. and Legacy Recordings are releasing the album, on CD, LP and digitally this Friday, September 30.

Fans will get the latest Jimi Hendrix CD Machine Gun: Fillmore East First Show 12/31/69 with their purchase of a pair of tickets from participating venues. Every pair of tickets purchased comes with one (1) physical CD of the new Jimi Hendrix album, Machine Gun scheduled to be released on September 30th, 2016. Check local listings for details.